Changes in Intelligence with Aging

However intelligence is characterized, some aspects decline with age faster than others. Some aspects of intelliegence actually increase to the sixth decade of life.

Do you get dumber as you get older?

In some ways, yes. Your brain slows down just as you can no longer run as fast as when you were young. For instance, vocabulary does not decline until very old age, but at an earlier age people often find themselves having to think about the word they want to use much more than when they are young.

Psychologist Timothy Salthouse disagrees with those who think cognitive decline starts in old age or late middle age. He tested people at different ages in four areas: memory, reasoning, spatial orientation, and speed and found that performance in all areas declined through adult life. He says his findings "clearly establish the existence of cross-sectional age-related declines for many cognitive variables prior to age 60." Further, he notes a "nearly linear decline from early adulthood on measures representing efficiency or effectiveness of [brain] processing". 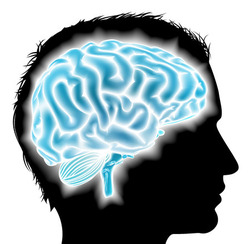 Scientists agree there is considerable inter-individual and intra-individual variability when it comes to the effect of aging on intelligence. Older people are a heterogenous bunch - much more than young people.

What causes cognitive decline as we age? What causes dementia? Nobody knows the answer to those questions, but scientists have found that accumulation of protein plaques in the brain is associated with dementia, and possibly general cognitive decline. The two proteins - tau and amyloid - both become involved in structures called tangles and plaques. The actual causal mechanism involving these proteins, if there is one, is unknown. More on loss of protein homeostasis.

Cognitive change is a normal process of aging. There are maintenance of skills and knowledge acquired through life experiences with advancing age that remain stable. These cognitive abilities, such as vocabulary and language, have been found to be resilient to brain aging and can even improve with age. Other cognitive processes, such as long-term memory, attention, and speed of processing, decline gradually across the life span. Research has found that there are many individual differences among older adults in the rate of change in some abilities. The new discipline of cognitive neuroscience of aging has the opportunity to lend new insights and ideas for theories of aging over the next decade. See also: Nautilus article on Why Dementia Is a Population-Level Problem"

Memory declines as we age, and this is of concern to people who experience it.

As age increases, episodic memory declines the most. Semantic memory second most. Procedural memory the least.

One way people cope with memory loss is by interacting with other minds, cognitive collaboration. Questions/interactions from others jog memory. When spouse/friend dies, loss of cognitive function.

Unfortunately the lower the intelligence level, the higher a person's risk for death. Interpretation of the cognition-mortality relationship: health self-care is analogous to a complex job in that it requires a variety of cognitive abilities such as knowledge, problem solving, planning, and decision making.

Most people feel there are different kinds of intelligence even if there is no universal agreement on what those types are. Psychologist Howard Gartner famously proposed eight types: musical, logical-mathematical, verbal, body, intrapersonal, interpersonal, spatial, and existential. Gartner later added other potential intelligences and other thinkers have also added ideas.

Both bodily strength and intelligence tend to be higher when you are young. Muscle strength peaks in the mid 20s. Studies have shown competitive swimmers peak at age 20 on average and track and field athletes at age 26. One, perhaps overly simple, model has both physical and mental decline as exponential.

Performance on tasks does not necessarily predict performance in everyday functioning. Mevertheless, researchers use tests like these to assess cognitive ability.