Telomeres are protective structures at the ends of chromosomes, they consist of DNA bases that are repetitive. Telomeres prevent loss of genome integrity by maintaining chromosomal stability. Chromosomes are susceptible to DNA damage and degradation as well as abnormal interactions with other chromosomes; hence the need for protective caps at their ends. Telomere attrition is considered a biomarker of aging. The shorter the telomere the higher the risk of developing age-related pathologies as well as aging prematurely. The enzyme telomerase inhibits telomere attrition. Telomerase maintains the tandem repeats by adding nucleotide sequences to prevent the shortening of the telomeres. However, telomerase translation activity declines with age. 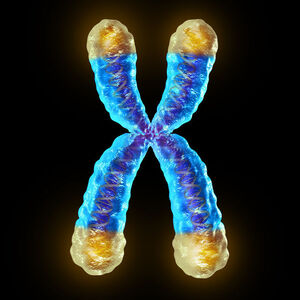 In vivo studies in mice have shown that administration of exogenous telomerase slows aging. Mice manipulated to be telomerase deficient aged prematurely but they recovered once the enzyme was restored. So on that evidence it appears telomerase therapy could slow aging, and scientists have become excited by the prospect; however, there are fears that telomerase use in humans could induce uncontrolled proliferation of cells and tumorigenesis.

Age-related pathologies have been linked with telomere shortening as a result of the downregulation of telomerase expression. Telomere attrition exposes chromosomal DNA to reactive oxygen species and free radicals resulting in DNA damage and pathogenesis of disorders brought about by DNA damage, abnormal recombination, and aberrant chromosomal interaction. Telomere erosion (decrease in quantity at the cellular level) has been connected to pathogenesis of diseases such as osteoporosis, osteoarthritis, bone marrow failure, dyskeratosis congenita, acquired aplastic anemia, pulmonary fibrosis, liver disease, and cardiac disease.

Increased telomere erosion as a result of telomerase deficiency in organs such as the liver, lymphoid organs, and lungs inhibits tissue regeneration and promotes cellular senescence and cell death. This results in development of liver cirrhosis, bone marrow failure, pulmonary fibrosis, and acute myocardial infarction. Telomere attrition is common among the elderly, which partly explains the vulnerability of the old to these disorders.